In our discussion of lenses, mirrors and optical instruments we use the model of geometric optics in which we represent light as rays which are straight lines that are bent at a reflecting or refracting surface. Many aspects of the behavior of light can’t be understood on the basis of propagation of rays. Light is fundamentally a wave and in some situations we have to consider its wave properties explicitly.

How can light be treated as a wave ?

In 1679, Huygens proposed the wave theory of light in which he said that each point of a source of light sends out waves in all directions.  The locus of all the particles of the medium, which at any instant are vibrating in the same phase, is called the wavefront.
. Each point of the wavefront acts as a centre of new disturbance and emits its own set of wavelets. The locus of these wavelets in the forward direction gives the position of the new wavefront at subsequent times.

when we drop a small stone on a calm pool of water, waves spread out from the point of impact. Every point on the surface starts oscillating with time. At any instant, a photograph of the surface would show circular rings on which the disturbance is maximum. Clearly, all points on such a circle are oscillating in phase because they are at the same distance from the source. Such a locus of points, which oscillate in phase is called a wavefront ; thus a Wavefront is defined as a surface of constant phase. The speed with which the wavefront moves outwards from the source is called the speed of the wave. The energy of the wave travels in a direction perpendicular to the wavefront.

If two or more light waves of the same frequency overlap at a point, the total effect depends on the phases of the waves as well as their amplitude. The resulting patterns are as a result of the wave nature of light and can’t be understood on the basis of rays.

Depending upon the shape of the source of light, wavefront can be of the following types. 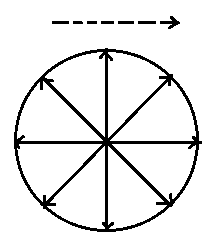 Cylindrical wavefront: When the source of light is linear in shape (such as a slit), a cylindrical wavefront is produced. It is because, all the points, which are equidistant from the linear source, lie on the surface of a cylinder . 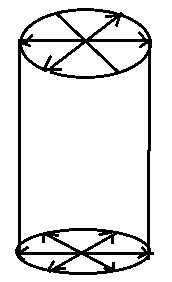 Plane wavefront: A small part of a spherical or a cylindrical wavefront originating from a distant source will appear plane and hence it is called a plane wavefront . 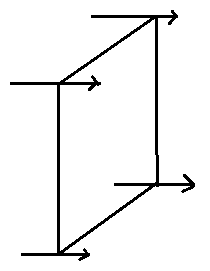 (i) Every point on the wave front becomes a source of secondary disturbance and generates wavelets which spread out in the medium with the same velocity as that of light in the forward direction .

(ii) The envelope of these secondary waves at any instant of time gives the position of the new wave front at that instant.  The wave front in medium is always perpendicular to the direction of wave propagation .

Principle of Superposition of Waves:

When two or more waves overlap, the resultant displacement at any point and at any instant is the vector sum of the instantaneous displacements that would be produced at the point by individual waves, if each wave were present alone”.

If y1 , y2 , ……yn denote the displacements of ‘ n ’ waves meeting at a point, then the resultant displacement is given by .

Coherent Wave : Two monochromatic sources of the same frequency and with any definite, constant phase relation (not necessarily same phase) are said to be coherent wave .

Consider two waves travelling in space with an angular frequency w. Let the two waves arrive at some point simultaneously. Let y1 and y2 represent the displacements of two waves at this point.

According to the principle of superposition the resultant displacement at the point is given by,

Since the intensity of a wave is proportional to square of the amplitude, the resultant intensity I of the wave from above equation  may be written as

Where I1 and I2 be the intensities of the two waves. It can be seen that the amplitude (intensity) of the resultant displacement varies with phase difference

Incoherent waves are the wave which do not maintain a constant phase difference. The phase of the waves fluctuates irregularly with time and independently of each other. The detected intensity is always the average intensity, averaged over a time interval which is very much larger than the time of fluctuations.

Phase difference between two waves at a point will depend upon :

(i) the difference in path lengths of the two waves from their respective sources.

(ii) the refractive index of the medium

(iii) initial phase difference, between the sources, if any.

(iv) Reflections, if any, in the path followed by waves.

In the case of light waves,

where λ is the wavelength in free space.

In the case of reflection, the reflected disturbance differs in phase by π with respect to the incident one if the wave is incident on a denser medium from a rarer medium.

What is Optical Path ?

Let a light wave travel through a distance x in a medium of refractive index μ.

The velocity of the light wave in the medium is v (let) and that in free space is c.

Where μ = c/v is the absolute refractive index of the medium.

How to find wavelength & velocity in a medium ?

The frequency of a wave is the characteristic of ‘ its ‘ source. Thus it does not change due to medium.

Thus the velocity of a wave changes from one medium to another medium due to its change in wavelength.

In a medium of absolute refractive index μ , the velocity of wave is

Solved Example : A light wave of wavelength 6000 A° in free space is needed to be its wavelength reduced by 10%. What should be the refractive index of the medium through which it is to be passed for the purpose?