Q:1. (a) Two similar point charges q1 and q2 are placed at a distance r apart in air. If a dielectric slab of thickness t and dielectric constant k is put between the charges, calculate the coulomb force of repulsion between them.

(b) If the thickness of the slab covers half the distance between the charges, the coulomb repulsive force is reduced in the ratio 4 : 9. Calculate the dielectric constant of the slab.

Q:2. Calculate the electric field at the centre of a non-conducting semicircular ring of linear charge density σ as shown in the figure.

Q:3. A small ball of mass 2 × 10-3 kg having a charge of 1 μC is suspended by a string of length 0.8 m. Another identical ball having the same charge is kept at the point of suspension. Determine the minimum horizontal velocity which should be imparted to the lower ball so that it can make complete revolution in a vertical circle. Take g = 10 m/s2.

Q:4. Four charges are placed as shown in the cartesian co-ordinate system. Calculate the electric field at point P(0, 0, a)? 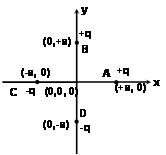 Q:5. Two hollow concentric conducting spheres of radius 10 cm and 30 cm are insulated. If the inner sphere is given a charge 10-4 C and outer 10-6 C, then calculate the intensity at the points P, Q and R which are situated at distance of 5 cm, 20 cm and 90 cm from the centre respectively.

Q:6. Some equi-potential surfaces are shown in figure (1) and (2). What can you say about the magnitude and direction of the electric field?

Q:7. A circular ring of radius R with uniform positive charge q is located in the y-z plane with its centre at the origin O. A particle of mass m and positive charge q is projected from the point P [ √3R , 0 , 0 ] on the positive x-axis directly towards O , with initial speed V. Find the smallest (non zero) value of the speed such that the particle does not return to P.

Q:8. A very long uniformly charged thread oriented along the axis of a circle of radius R rests on its centre with one of the ends. The charge of the thread per unit length is λ. Find the flux of the vector E across the area enclosing the circle.

Q:9. An Aluminium rod of length l having net charge ‘ Q ‘ is placed in front of a small charged Aluminium ball of mass ‘ m ‘ and charge ‘ − q ‘ at a distance l/2 from centre. If the space between the strip and ball offers negligible resistance to the motion of ball then find the velocity with which it reaches a distance x from the strip. (The charge distribution on Aluminium rod is uniform and it is fixed). 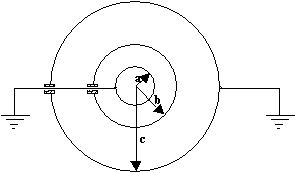